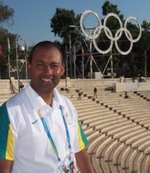 Alois started table tennis at the very young age of 5. Alois began by hitting a ball up against the wall at home for hour upon hour. He played his first competition at 9 and played at the Junior level for his State each year and won the State Junior title in each age group from Under 10 to Under 18.

He started to become interested in coaching in 1986. Alois, took up the position of Development Manager with the State Table Tennis Association. In this role he worked with players of all abilities including school children through to a fabulous 50's group helping them with their table tennis skills. He also co-wrote the "TOPS Table Tennis Manual" which is now used as part of the ITTF Level 1 Coaching course.

Alois has coached juniors at his local club Coburg and other venues throughout Victoria. A number of these students have progressed to be National Junior champions and Olympic representatives. He progressed to coach and manage many National teams including the Commonwealth Games Men's team in Manchester 2002 and the Australian Olympic Team in Athens 2004. Alois is always keen to assist players of all abilities to enjoy the sport he has loved for years. 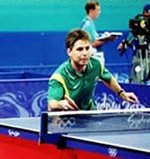 Jeff's start in table tennis was at the local association in Canberra, Australia. This was a modest competition that didn't have a great track record of producing National champions. He soon rose to the top of the rankings in Canberra through a lot of enthusiasm and dedication. In 1989 he won the Australian Under 15 singles title and was runner up in the Under 17 singles title in the same year.

He chose to leave his hometown, Canberra, and move to Melbourne (a distance of 650km or 400 miles) at an the age of 18 to pursue his dream to represent his country in Table Tennis. It was a bold move and initially it was a difficult period for Jeff and he struggled for many years to make it into the National Australian Senior Team.

Eventually through determination, practice and self belief, Jeff made it into the Australian Senior National Table Tennis Team. He represented Australia at several tournaments but with the introduction of a new National Coach in 1996 was unable to meet the new strict training requirements due to financial and work commitments. He was dropped from the team.

However after a few years in the wilderness, and the introduction of a new National Coach, the dedication and bold move to leave his hometown finally paid off for him when he won the qualification tournament for the Sydney 2000 Olympics thereby affording him the honour of representing his country in a home Olympics. This is an honour achieved by very few in this world.

Our mission with PingSkills is to develop the best table tennis tutorials on the Internet. Table tennis is a great game that anyone can learn and is a game for life. With the intracasies of spin, speed, and placement, there's always something more to learn. Learning new skills is fun and rewarding, and the most enjoyable part is witnessing how hard work and practice pays off in the form of tangible improvement.

There are plenty of free tutorials scattered around the internet, many of them are quite good. However, I don’t think there is a succinct central resource which guides you through the entire table tennis journey. Many written guides and online videos teach people bad habits when they first start out playing table tennis, and it is difficult for a beginner to discern between the good and not so good tutorials out there on the web.

Over time, without proper direction and guidance, these bad habits become ingrained, and they can be very hard to shake. Our aim with PingSkills is to streamline the learning process, teaching efficient habits and correct techniques from the very beginning, so that you can get the most out of your table tennis journey. I believe that our experience and knowledge can help create not only an extremely efficient learning process for beginners, but awesome content and tutorials for experienced players as well.

Alois vs Italy (in his younger days)