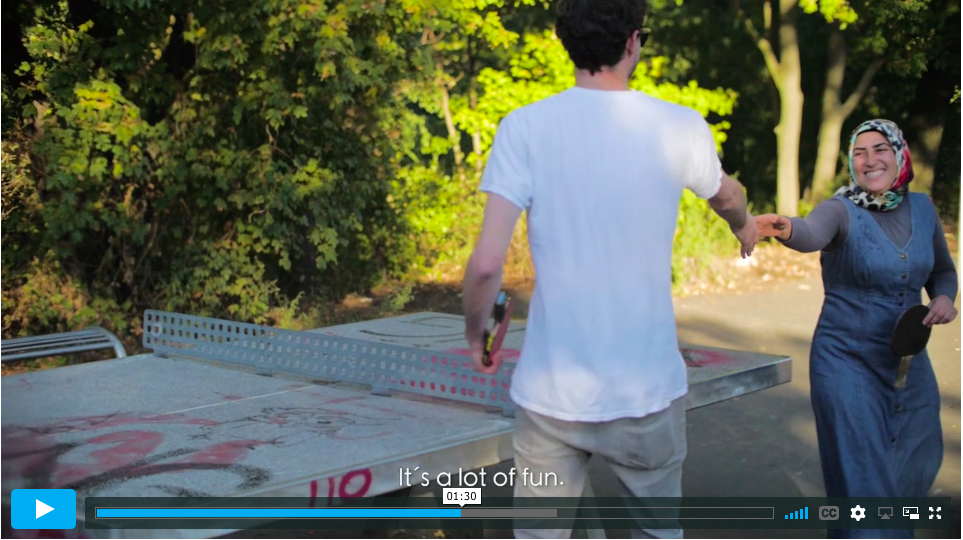 Here is an interesting email from one of our readers, Steven.

This looks like a great initiative to make Table Tennis accessible to the general public and see how the game can help people in so many ways. Take a look at the video link.

"Thepingpongproject.com".  This is a short film about Berlin ping pong and urban ping pong in general made by my son Kaleb who works as a film maker in Berlin.  The important point is not so much the game but the potential it has to organize a diverse community around healthy issues like sport rather than divisive ones like politics.

Another example of this occurred a few years ago in Japan.  My oldest son Seth was working as an English teacher in a Japanese high school.  Every day at lunch, he would be served a bento along with the rest of the staff.  They would then head for the ping pong room for 30 minutes where people would pair up randomly and play doubles to five points, loser moving on to allow another team to play.  This was a great way to keep the teaching staff talking and having fun together, a great morale booster for all.

"Ping pong map.net" is a short description of the over 1500 outdoor ping pong tables in the parks of Berlin.

Our outdoor ping pong project in Ames, Iowa is currently slogging through the bureaucracy for approval, although we already have a donor for the two tables.  There may not be much more to report until spring.  I'll keep you posted.

We look forward to hearing more from Steven about how his own project that he is trying to get up and going in Ames, Iowa works out.  It is a great idea and would be great to see the movement spread around the world.  Maybe we as PingSkillers can help it in some way.

Great idea . I will consider creating a outdoor ping pong table which can also be a garden table for outdoor meals with friends etc. I am sure that I will be

able to design a pop up and down net so that it is a proper table when required. I need to work out what materials to use to get the same bounce effect as with

a standard indoor table and wont be effected by the damp wet or frosty winter weather.  Regards  Peter

Great Peter.  Let me know how you get on.  If you have any good ideas for others as well.

Is the table for everyone?

To save all that invention work, can I suggest using a net that clamps on? Or off?  I think Butterfly make one.

Hi Roy, Have been tied up for a while. so a little late responding. Now why do I always complicate simple

issues. Off course you are right. Thanks for saving me inventing time.

There are 2 outdoor tables at the Box Hill Gardens. Very strange ball trajectories at times.

In province of quebec,  canada. We have these table all over the kids park.  Many have pick- nik area nearby. Funny enough it doesn' t take long that adult stepping up and eant to take kids place to play. The park loan free the raquet and ball to play. It give a festive atmosphere. Ping is outside of the basement.??

I play every day on an outside table, weather permitting. The net is a butterfly clip on - absolutely brilliant, it's set up in less than a minute

Interesting. I am also running a blog about ping pong and other table games. I am really determined to help players make the right choices when purchasing tables. I have articles of between 1000 and 3000 word that explain in details what qualities to look out for. Please visit top10table.com for more details. Share the good news with other players.