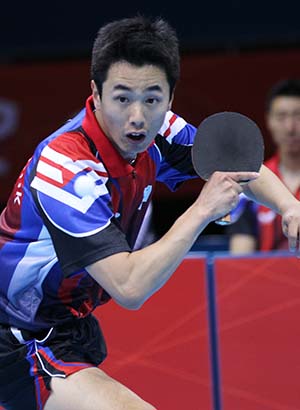 Joo Sae Hyuk, a great defender in action. Photo by courtesy of the ITTF

Here are some tips for playing defensive players. We don't often get the opportunity to play defensive players so each time you get an opportunity use it as such. One of the defenders assets is that you don't have as much experience at playing against their style. So, use your opportunities wisely. If you ever get a chance to practice with a defender, grab it, even if you don't think they are as strong as you. If nothing else it is a good way of improving your topspin against backspin.

Think about your serve just as much as you would against an attacker. The serve is still vital when playing defensive players. Don't fall into the trap of always serving long to them. By serving short you are bringing them close to the table. Your next attacking stroke becomes more effective when they are close. If you serve long they are already in a defensive position for your first attack. You may consider serving with less spin to give yourself an easier next ball, but also consider trying to serve with spin and dragging a weak return out of them.

The hardest place for a defensive player is in their middle or crossover point. Try to find this position with your strong attacks. The slower ball doesn't have as much effect there because they have time to move into position but the fast ball can really jam them up. Consider if their forehand or backhand is better. This has a few aspects to it.

In and Out movement

Defensive players often enjoy sitting back away from the table and chopping. They don't like being brought in close and then having a ball hit fast at them. It gives them less time. You can bring them close to the table with a push or drop shot. The important thing about a push or drop shot is to get the ball short, close to the net. This forces the defensive player to move in closer to the table. Hitting the ball a little higher to get the ball short is often fine.

One of the weapons a defender has is their variation of spin. Watch the ball closely to see what spin is on the ball. The less time they have the less likely they will be able to control the amount of spin on the ball and play a deceptive chop.

Try out some of these ideas next time you play a Defender.

Good advice by Alois. I play defensive myself, but mainly on one side. The best thing you can do as an attacker is to get the defender close to the table, and then smash into their body or crossover point. Some attackers loop far too hard against chops. That only creates a big smile on the choppers face as more topspin is not more difficult to return (not with long-pimples-out, at least) but returns back a tremendous backspin to the attacker, hard for her to loop on. Instead, make small touchy loops with just enough spin to return the ball, and have patience, and let the defender do the mistakes. For the defender the most difficult part is to get the correct length of the chop. So vary the speed a bit of the loops. Now and then, cut or drop instead, before the backspin becomes too strong - but when you do that, keep the ball low to make sure the defender cannot attack on you easily. Most defenders today, on the comparable playing strength (ranking level), have an equally good single attack (flick, smash) as the attackers have.

Vary placement and tempo/speed to destroy the rythm of the defender. Against those rare defenders that only chop (on both sides, and don't play many topspin strokes), also try start the rallies with little or no spin, either slow or very fast balls. This makes it really difficult for them, having no spin and speed to work with.

Varying spin, placement and speed is in fact what I do against an attacker as well. I play active topspin on one side and passive backspin or spin-reversal or float on the other, so I have the maximum possibilities to deceive or puzzle my opponent by creating, controlling and varying the spin, speed and placement.

Use your brain cells when playing defenders, patience is the key but tactics is everything. In my view, your tactical strength is your ability to adapt to the opponent's playing style and changing tactics (by pre-game-preparations and by real-time analysis during the game); to identify and analyze the player's strengths and weaknesses and the ongoing changes in her tactics, to find the pro-active solution for your tactics: to best utilize your strengths and your opponent's weaknesses, and don't letting your opponent utilize her strengths and your weaknesses, and counter her tactical changes with yours, all during the game. Select each stroke you do for the right purpose: probing, winning, defending/keep in rally or preparing for your next stroke, making that better for you.

The above is my personal view, based on my own experience.

Being a classical chopper,I wonder if there is any other thing I have not found out about countering these strategies?
Is there any way,for example,how can a chopper erase the variability of the attacker's play?

Take a look at this tutorial on Forehand Topspin Off Backspin.  This will form the base of your stroke again a chopper.

Work on this first.  When the ball bounces only once on your side of the table then this is your opportunity to play this stroke.

hello alokis can u show how to become good at chopping