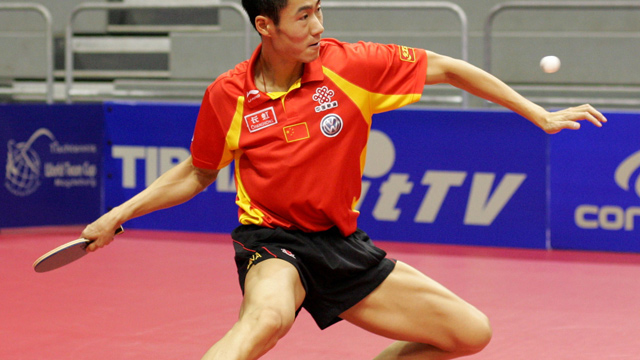 In the last issue we suggested that Strength Training is a very useful addition to Table Tennis Training but not all players or their coaches realise the principles of specificity, overload, and power to weight ratio which govern strength training. In this article we will discuss the principle of Specificity in some detail.

I have often come across players who train in the same way as bodybuilders do, to develop big arms and think that it will improve their ability to use their arms when hitting a ball. In fact in many cases a Table Tennis stroke starts from the toes through the legs the waist and shoulders, the arms are merely APPENDAGES.

The outcome of exercise of any type is specific to the type of work done. Sports conditioning follows the SAID principle, or Specific Adaptation to Imposed Demand. Since table tennis requires a mix of strength, power, flexibility, agility, muscular and cardiovascular endurance a strength conditioning program for Table Tennis calls for a variety of methods each directed to a different aspect of fitness. Some of these outcomes are contradictory to each other, for example developing the endurance of a marathon runner is likely to be detrimental to a strength athlete like a weight lifter or shot putter or even the power of a long jumper. Of course the bulk of a Sumo wrestler would not help the agility needed for a Table Tennis player. Another aspect to be remembered is that strong or flexible shoulders do not necessarily go with the same qualities in the legs. Some players ask “what is the best exercise for speed or strength or agility”. In fact there must be a variety of approaches and therefore when planning a strength conditioning for any sport there are certain principles of specificity that must be considered:

If a player needs to improve their ability to move around the court there is hardly any point in concentrating on building big arms and chest. The muscles of the legs and waist (quadriceps, gluteals, plantar muscles of the lower leg and the deltoids) need to be developed. Again the ability to move around the court cannot be confined to strength. Speed and power must be built on a base of strength. Also developing the muscles used in a particular stroke need not necessarily give optimum results. It is important that the force is applied in the correct direction.

2. Direction of application of force

Some muscles groups, especially the larger ones, can apply forces in different directions. For example in the forehand top spin the deltoids are brought into play, but the deltoids can move the arm forward sideways or back and it is the forward action which needs to be developed to aid this movement.

Training the appropriate group and in the correct direction are important but to gain optimum results the action should also be developed through at least the same range of movement required in the sport. It would be preferable to work the muscle through a greater range of movement (ROM) than that required by the sporting action that is to be strengthened. For example if a player rotates the trunk through the full range when performing the topspin, trunk exercises must be performed through at least that ROM. However, even if the sport does not require the complete ROM possible in a joint, some work should be done through the full range to prevent losing flexibility and to allow for the odd occasion when a greater ROM is required. It must also be remembered that table tennis is an open skill and therefore every exercise must be performed in a variety of ways.

In a sport like table tennis the coach must consider the purpose of conditioning training, surely power is a consideration and so is strength in the prevention of overuse injuries but then endurance is also an important requisite. However the endurance required is not the continuous action of a marathon runner but rather a more intermittent type. Again not all these qualities can be developed at the same time.

Fig 4 Layout of table and court for shadow play.

Also in women’s Table Tennis rallies tend to last longer than in the men’s game and therefore the volume of movements like lunges and other exercises that form part of shadow play would need to be varied. To develop endurance the coach should use some type of shadow play similar to table work with similar rest pauses. In this type of training the court can be nominally divided into 9 sections (Fig 4 above) and the player should respond to a call for “drop shot” with a forward lunge, forehand 3 with a lunge to the forehand, forehand 9 with a backward lunge to 9 etc etc. This variety of shadow play encourages the player to think and react to a stimulus rather than having a person go from point to point automatically. The coach should call a let after the average number of strokes in a rally for that class of player. This can be repeated 20 times (11 – 9), and with a minutes break seven times. Unless the games go beyond 11 this would be the maximum volume in a match.

Shadow play involving the lunging action should be used for endurance but heavier lunges should be performed to develop strength in these muscles where the braking action is required when moving across the court, or a stable base is required when playing a strong stroke. The athlete/s weight training should therefore be focused on power of movement, strength of the joints and not the endurance to run long distances. To reiterate the training should concentrate on the development of strength and power but not the hypertrophy of a bodybuilder.

I am Kaleel.  It's good and interesting.  Is there any method for the movements in shadow play within 1 to 9.  Is there any video? what is the exercise for deltoid muscle? Please guide me.

Yes you can use Shadow play in this situation.

Are you having specific issues with your deltoids?

I am Kaleel.  I do not have any issue with my deltoids.  I am perfectly fit and healthy.

I Am Akain, Can you please show video clip.

Sorry we don't have a video for this, just the blog.

Alios, We would love to see a video on this topic.